Persecutory Prosecution and Political Will to Fight Corruption: Striking the Balance 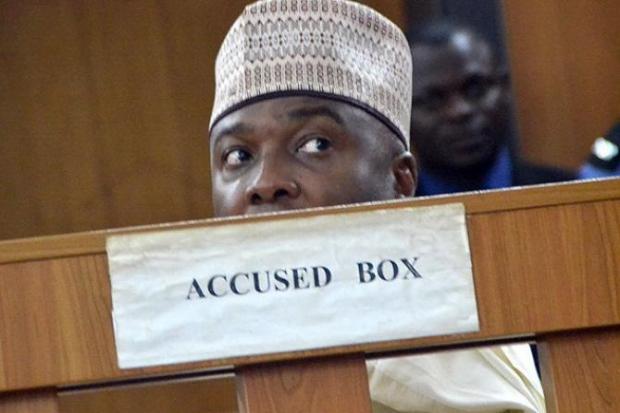 Nigeria’s Senate President, Bukola Saraki in the Accused Box during his trial on Corruption Charges

On the 5th February 2016, the Supreme court in Nigeria dismissed an appeal by the Senate President of the country, Bukola Saraki, paving the way for his trial on corruption charges to commence at the Code of Conduct Tribunal.  The widely anticipated decision of the apex court was considered a victory for anticorruption efforts in the country, at least in the interim.  There were however a notable number of Nigerians who felt that the decision was yet another step in the unfolding persecution of the senate president through prosecution.

The background to the latter view arises from the dramatic  emergence of Bukola Saraki as Senate President in June 2015, against the apparent dictates of the Presidency  and the top hierarchy of his party, the All Progressive Congress (APC).  Since his emergence, Saraki has had to deal with different corruption-related accusations against his person or close relatives and allies, including his wife Toyin Saraki.

Justified or not, Saraki’s recent travails with anticorruption agencies have led to the inevitable impression that they are not unconnected with his political squabbles with the Presidency and the leadership of his party.  This is more so, considering the crux of the charges against him at the Code of Conduct Tribunal has to do with assets declaration made by him whilst serving as Governor of a State dating as far back as 2003 and never brought up until now.  Furthermore, there are sixteen former governors in the current Senate of Nigeria, most of whom have long-standing accusations and even cases already instituted against them by anticorruption agencies.  None of these accusations or cases have received the attention and diligence that has been accorded Saraki’s case.

Persecutory Prosecution – Does it Matter?

This situation leads to a number of salient questions that have ramifications for the anticorruption regime in Nigeria and elsewhere: would Saraki be on trial today if he had not fallen out with his party’s hierarchy?  Corollary to this in broader terms is the fundamental question as to whether it matters at all if a person is facing prosecution for corruption as a result of political persecution.  Does the motive behind the prosecution even matter if at the end of the day, the person being prosecuted is proven to be corrupt?  Does the end not justify the means?  To what extent should the ordinary citizen be concerned about the motives and processes that lead to the prosecution of corrupt public officials, as long as they are prosecuted and punished?

Experience around the world has shown that fighting corruption is no easy task.  The global framework for anticorruption in the last couple of decades continue to emphasize the importance of strong governance institutions to eradicating corruption.  However, the situation in countries like Nigeria and a few other developing countries who have made reasonable strides in establishing such institutions but not achieved commensurate reduction in levels of corruption, reiterate the importance of political will in the fight against corruption

Can Political Will to Fight Corruption be Apolitical?

Political will in this context presupposes, not just the will to fight corruption, but to do so impartially and with due regard for the rule.  The latter is a factor that has been pointed to severally since the Presidency of Muhammadu Buhari began in May 2015.  Having being elected on the principal promise of fighting corruption, the government has apparently taken some steps to enunciate its commitment to fighting corruption.  However, the manner in which it has gone about this, as displayed in Saraki’s case, has also led to concerns about the neutrality of the fight against corruption and its regard for the rule of law.

This has created a very complicated situation for ordinary Nigerians and observers.  Haven cried foul over the lack of political will to fight corruption for a long time, should the efforts of a leader who seemingly possesses the will to do so be criticized due to perceptions of partiality in his efforts?  Provided those who are prosecuted are corrupt, I guess many persons would care less about the motives behind such prosecution – political or otherwise.  It would however be a very different situation where the person being prosecuted is innocent and is only being persecuted as part of a political agenda, and that is where the danger lies.

Until then, very few people would be ready to play a pivotal role in detracting the most serious commitment yet by a leader to fight corruption in the country.  The perception that corruption is the biggest challenge to development is widespread and perpetuated both within and outside the country.  In that light, it would appear that most persons would not mind sacrificing secondary issues like neutrality and even the rule of law, provided the fight against corruption is on full throttle.

Issues like political interference in the work of institutions like anticorruption agencies and the rule of law however, do have ramifications beyond just anticorruption and determine whether the fight against corruption is sustained over time or continues to oscillate depending on who is in control of state power.  Nigeria and other countries in a similar situation will have to decide the trade-offs and determine where the right balance lies.