How Africapitalism Could be the Next Pan-Africanism 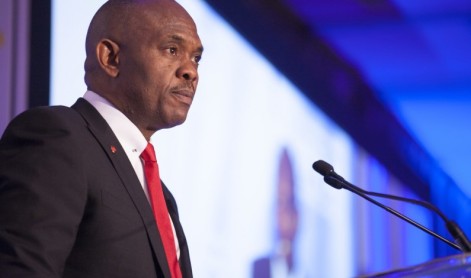 Entrepreneur and Philanthropist Tony Elumelu is Credited with Having Coined the Term “Africapitalism” and Continues to Champion the Ideology.

It is just over one week since the conclusion of the Oxford Africa Conference, 2015.  As always, it was a gathering worth attending in its own right.  With political leaders, top academics, entrepreneurs, consultants, students, NGOs,  entertainers and innovators all in attendance, the Conference ex-rayed developments in Africa from the widest range of perspectives possible, within the context of the theme: “A Continent on the Move: People, Politics and Business Across Borders”.

As would be expected from a gathering of this nature, plenaries and panels discussed various thought-provoking subjects that appealed to different sections of attendees.  One of such plenary sessions was themed Africapitalism and Entrepreneurship as a Catalyst for the Development of Africa”.  As I listened to Tony O. Elumelu, a Nigerian entrepreneur and philanthropist articulate the idea of Africapitalism and its implications for development in Africa, it was easy to see how strategic this ideology could be for development in the continent.

Africapitalism refers to an economic policy which posits that the private sector in Africa has the power to transform the continent through long-term investments, creating both economic prosperity and social wealth.  This is premised on the belief that the private sector has the potential to solve the many lingering development challenges of Africa more effectively than public sector-led action, international development assistance or philanthropy.

In the last decade or so, much has been made of the “rising Africa”.  There is another rush for opportunities and prominence in Africa.  China is providing finance and is involved in infrastructural projects all over the continent.  Europe is trying to restructure its strategy for the continent, and Obama and the Americans even had a summit last year specifically to discuss trade and investment, or perhaps, to ensure that they were not left out of the rising Africa.

Whilst globalisation and business sense entails that Africa must trade and cooperate with other continents and countries on a wide range of issues, there is  probably no better way to show that the continent is indeed rising than for Africans to finally take the driving seat for their development.  This is an idea that has been mused for a long time, but there has hardly been any concept or ideology that has comprehensively grasped its operationalisation until now.

Entrepreneurship and innovation is already flourishing on the continent.  Multinational corporations are beginning to emerge with the likes of Dangote and Elumelu himself leading the way.  Africapitalism, properly articulated, can provide a rallying ideology around which private-led development by Africans can flourish.

There are two reasons why the concept of Africapitalism is and will be important for development on the continent: the rational and the emotional.  On the rational part, the perennial failure of the public sector to drive development in Africa means it is only rational to consider the private sector as a viable alternative.  By now, I am sure that the world and Africans themselves are tired of complaining about the failure and/or inability of leaders from all parts of the continent to engender meaningful development in their various countries, despite the wealth of resources in most of these countries. Bad governance and corruption appear insurmountable.

Philanthropy and international development assistance has also failed to make any reasonable impact on the continent.  Thus, over time, a lot of Africans have grown increasingly suspect of aid, western aid in particular.  It is therefore just about the right timing for the private sector to take over the drive for development in Africa.  Africapitalism succinct captures this mood.

And talking about moods, the second aspect of the importance of Africapitalism has to do with it’s potential to unleash an emotional drive amongst Africans to take control of their development.  In the same way that the ideology of Pan-Africanism built solidarity amongst Africans so many years ago, Africapitalism could be the next concept that, not only unites Africans, but inspires the continent to finally realise its long-acclaimed potential.  I certainly felt that way as I listened to Tony Elumelu at the debating chamber of the famous Oxford Union.

It would amount to overselling the idea not to recognise the concerns that must be taken into account in pursuing Africapitalism.  For all its popularity, capitalism has always had its detractors.  It is often said that private sector-led development might lead to growth without development.  Concerns of inequality and irresponsible practices occasioned by capitalism has led to the emergence of concepts like corporate social responsibility, shared value and inclusive growth.  Hence, the ideology of Africapitalism must make paramount the components of creating social wealth and social enterprise.

Whilst I am sure many would prefer to leave the public sector and its failures behind as the continent looks forward to this drive for private-sector led development espoused  by Africapitalism, this is practically impossible.  Government must play its inexorable role of providing an enabling environment – regulatory, institutional, infrastructural and otherwise.  Indeed no entity can play the role of checking the inevitable excesses of unbridled capitalism like government  can, and it must live up to the task of steadying the ship of development as it is propelled on by the private sector.  For political leaders in Africa, simply carrying out the basic job of governance properly will no doubt be a good start.

WHY ALL THIS MATTERS

It is estimated that by 2050, the population of Africa will more than double from the current 1.1 billion to 2.4 billion people, with the population of Nigerian alone expected to surpass that of the US.  By then there would be about 1 billion Africans of working class age with over 50% of people living in cities and consumers in Africa spending almost 2 trillion dollars.  Currently, 60% of the world’s total amount of uncultivated arable land is located in Africa with more than 52 cities on the continent have a population of at least 1 million each.

Understanding and putting into operation Africapitalism provides an ideology and drive for Africans themselves to  harness and take advantage of the enormous potential of the continent to achieve long-overdue development, through private sector-led enterprise.  It might just be the next Pan-Africanism.