“From Whose Decisions to Whose Actions?” Reflections on UNCTAD 14, Youth Participation and Development

Photograph with the Secretary-General of UNCTAD,  Dr. Mukhisa Kituyi on the first day of the Youth Forum

It has been just over two weeks since I joined over two hundred youths from all over the world in Nairobi for the Youth Forum of the 14th United Nations Conference on Trade and Development.  The conference was aptly themed, “From Decisions to Actions” with an apparent focus on the implementation of the global Sustainable Development Goals (SDGs) adopted at the UN in September last year.

As youths, we had been invited for the first time to UNCTAD to contribute to the discourse on the key issues of education, more and better jobs and state accountability, with the ultimate objective of “Shaping the World we Want”.  But did we really achieve this goal?

A fortnight after leaving Nairobi, as I look back on what was, without doubt, an enriching experience, I realise that our participation in UNCTAD 14 will surely shape the world we want, but not in the ways we expected when we were selected for the conference and definitely not through the major activities or outcomes that UNCTAD itself organised the youth forum around.

As is the case with most instances of social exclusion of groups in society, a few years down the line, many might be asking how and why it took most UN bodies like UNCTAD 50-60 years before creating space for youth participation in its discourses.  However, UNCTAD deserves commendation for taking the first step in this respect in Nairobi.  And this was indeed a first step in most ramifications: the organisation of the youth forum reflected this in the piecemeal manner the agenda and activities were undertaken and in the fact that there was no predetermined plan for youth participation in the main events of the Conference.

But this was a good first step nonetheless.  Participation is often comprised of “Form” and “Substance” very much akin to UNCTAD 14’s theme that distinguishes “Decisions” from “Actions”.  And by inviting us to Nairobi, UNCTAD had taken a major step in providing the “form” for youth participation in development discourses.  It would however be mistaken on our part as youth, and also from UNCTAD’s perspective, to magnify this beyond what it really was: a formal recognition of the role of youth, nothing more; nothing less.  Looking back now, I realise we were never really going to change the agenda of UNCTAD or indeed that of the United Nations on the key issues we discussed in Nairobi, neither were we going to significantly impact the policies and programmes of our governments back home with the outcomes of our conversation.

So Where does the “Substance” of Youth Participation Really Rest?

My understanding of the essence of my participation in UNCTAD 14 and positively of youth participation in fora of that nature came full circle in the evening of July 20; the penultimate evening of the youth forum.   Due to my research interest, I had been working with the sub-group on state accountability at the forum and on that evening, for about seven hours (5pm to 12 midnight) over fifteen participants drawn from countries as diverse as Uganda, India, Mexico, Iceland, New Zealand, Namibia, Australia, South Sudan, Great Britain, Dominican Republic, Liechtenstein and Nigeria worked together on what was to be the Youth Declaration on state accountability.

We discussed, argued, voted and reached consensus on the use and expression of paragraphs, sentences and even words as they describe the world we want on the broad range of issues bordering on state accountability. 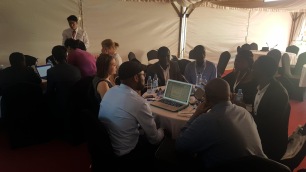 Preliminary discussions of the state accountability team in groups

Intense conversations of the general group, even during a break for refreshments

The state accountability team at the end of the night

Back in my room that night, I put down the first thoughts of this reflective piece.  The substance of our participation in the forum rests, not in the declaration that was presented to UNCTAD the day after, but rather on what we had made and would eventually make of the space created by UNCTAD for us to meet; to understand the experiences of youth in our various countries, to learn from the process of creating consensus in a room with people from all over the world, to create and sustain life-long networks between ourselves.  They were, in reality, the factors that would shape the world we want on the long run.

In a fitting coincidence, shortly after listening to Dr. Mukhisa Kituyi, the Secretary General of UNCTAD who put together a final cocktail dinner for us on the final day of the forum and to whom we will always be grateful for commissioning the forum in his time, I had a fascinating conversation with one of the delegates, a young artist from South Africa.  She took the trouble to explain how her art was all about providing spaces for people to meet, to dialogue and create connections.  She convinced me never to disregard the importance of such spaces in fostering good in the world.  And so we must all recognise and appreciate UNCTAD for providing such a global space for us to meet.

Going Forward: Bridging the Gap From Decisions to Actions

Like artistic spaces, neoliberal theorists often argue that government should have as limited a role as possible in the economy, by concerning itself only with creating an enabling room for private enterprise to thrive.  In the same vein, how we thrive as youth with the space provided us by UNCTAD is left to us.  It is our prerogative now to use this space to continue the conversation, to forge a common voice and demand for more spaces, to proffer and build solutions and thereby  bridge the time-lapse between decisions and actions as the world moves towards realising the SDGs.

To create the needed impact therefore, our approach has to look beyond just influencing how governments, inter-governmental and non-governmental institutions move from decisions to actions, to how we can make use of the spaces created to reach our decisions and take our actions and shape the world we want in the process.

It has been just over three weeks since South Africa’s President Jacob Zuma survived an impeachment vote in the country’s National Assembly.  This followed the ruling of the Constitutional Court that he had violated the constitution by failing to repay public money spent on his private residence in Nkandla.

Like David Cameron surviving calls for his resignation following the Panama Papers scandal in the British parliament, it was safe to reckon that Zuma might have survived this.  That was until yesterday, when the country’s High Court declared that he should be charged with 783 counts of alleged corruption, fraud and racketeering in connection with a £4.4 billion arms deal signed when Zuma was deputy president in 1999.  The charges were dropped by the National Prosecuting Authority (NPA) just weeks before the 2009 election in which Jacob Zuma emerged president.

Constitutional Institutions and Principles are Pivotal

Following the relative success stories of Singapore’s Corrupt Practices Investigation Bureau (CPIB) and the more prominent Independent Commission Against Corruption (ICAC) in Hong Kong, the model mechanism for dealing with corruption in the last couple of decades has been the establishment of specialised anti-corruption agencies charged with fighting corruption in their various countries.  The United Nation Convention Against Corruption (UNCAC) makes the establishment of such specialised anti-corruption agencies obligatory for state parties in Articles 6 and 36 of the Convention.

After years of relative failures, possible explanations proffered include the lack of attention for local circumstances in promoting this global model of institutions, the inadequacy of requisite infrastructure, deficit in capability of anti-corruption personnel and more importantly political interference in the work of these institutions.

The issue of political interference has featured prominently in most countries, prompting the cliche call for political will in the fight against corruption.  The Executive branch in particular has been known to use these institutions to witch-hunt political opponents whilst simultaneously shielding their corrupt supporters from prosecution.  In most countries, the performance of anti-corruption institutions has become only as long as the foot of the head of the Executive.

South Africa provides a good model in this regard.  Chapter 9 of the Constitution establishes not only the office of the Public Prosecutor, but also for other important state institutions to support constitutional democracy like the Human Rights Commission, the Commission for Gender Equality and the office of the Auditor-General.

Considering the broad range of desperate steps taken by Jacob Zuma to shield himself in the light of the Nkandla scandal, it is difficult to see how the Public Prosecutor would have pursued the case against the President as she did without the all-important backing provided by the constitution.  Recent efforts by the Senate in Nigeria to amend the Code of Conduct Act for the specific purpose of assisting the Senate President in an ongoing corruption case shows just how vulnerable these institutions are to political manipulation and restates the importance of providing constitutional backing for anti-corruption institutions and efforts generally.

In the face of overwhelming emphasis on institutions in the fight against corruption and in the overall pursuance of good governance, experience has shown the futility in expecting corrupt politicians and political systems to create independent and effective transparency and accountability institutions.  Perhaps the emphasis should de-emphasise seeking political will to fight corruption and rather concentrate on insulating these institutions from any form of influence from political will in the first place, at least until the point when the political systems in most countries are entrenched in positive values and therefore dependable.

Providing constitutional backing for these institutions might not, by itself, provide a final solution to the challenge of dealing with corruption, but it will at least give the widely-spreading anti-corruption institutions a fighting chance against entrenched grand corruption prevalent in most countries.